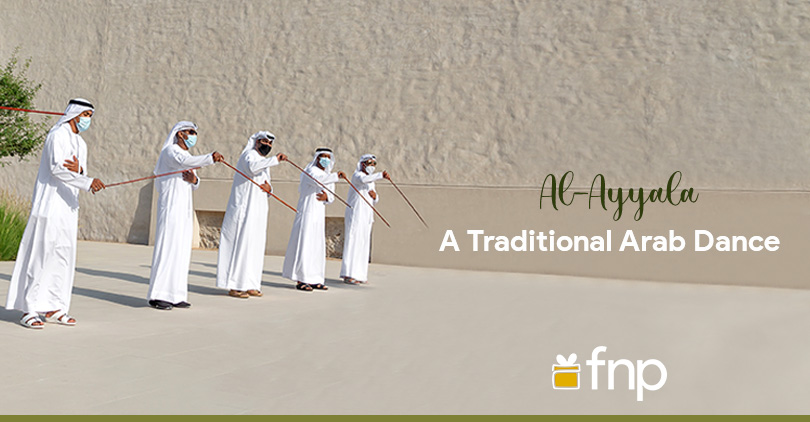 It’s a well-known fact that the UAE is a culturally rich hub of art and architecture. The country is blessed with a great heritage and vibrant culture that leaves everyone feeling awestruck. This encompasses traditions, crafts, food, sports, places of archaeological & historical importance and not to forget, music and dance. The country has had a lavish past and its people have resorted to the medium of dance and music to express their emotions. Among many traditional dance forms, Ayala dance is one that will make you tap your feet to its beats and rhythm. If you are eager to know more about UAE national dance – Ayala Dance, then check out our short guide!

A popular and highly expressive dance form, Al Ayala is one of the most traditional dances of Dubai and the UAE. Demonstrating Emirati values and heritage, the dance is no less than a symbol of national identity.

Also known as Iyala or the stick dance, this form of dance imitates war, over the steady beats of the Al Ras (a large drum), which build up a tempo for the Takhamir drums. There are two rows of about 20 men (standing in front of one another) holding bamboo canes which represent the swords of war. They sway these sticks along with their heads synchronously. Also, the men stand close to one another to express unity and cooperation.

Other than drums, leather bagpipes, brass cymbals, tambourines and flutes are the traditional musical instruments played during the dance. Al-Ayala also involves chanted poetry. More so, there are some additional performers who hold swords or guns, and occasionally hurl them to the sky and catch them.

What does this Dance Represent?

Ayala dance is a significant part of the UAE culture. It represents the ethos, courage and bravery of the nomad Arab people’s life. This way, it instils the importance of dignity and honour. Moreover, since it shows the foundation of Emirati customs, the Al-Ayala dance is of utmost importance to the country.

The dance has been practised and performed for generations all across the UAE. The dance is of so much importance that it was added to UNESCO’s Representative List of the Intangible Cultural Heritage of Humanity in the year 2014.

Is this Dance Performed Only by Men?

Though the performance is generally performed by men, it is open to all. Anyone can come and join the event. The more the number of performers, the more amazing Al Ayala dance is considered. Women have a different version of this dance. They wear vibrant dresses, move their hair to the drum beats and recite poems to celebrate the victory.

Al Ayala dance is performed on various festive occasions, national occasions, welcoming ceremonies and weddings as well. This traditional dance is maintained by the generations of Emiratis and carried forward beautifully.

To conclude, Al-Ayala Dance demonstrates the rich heritage of the UAE. So, while you are on your next trip (or stay) in Dubai, try to join the bandwagon to soak it all in.