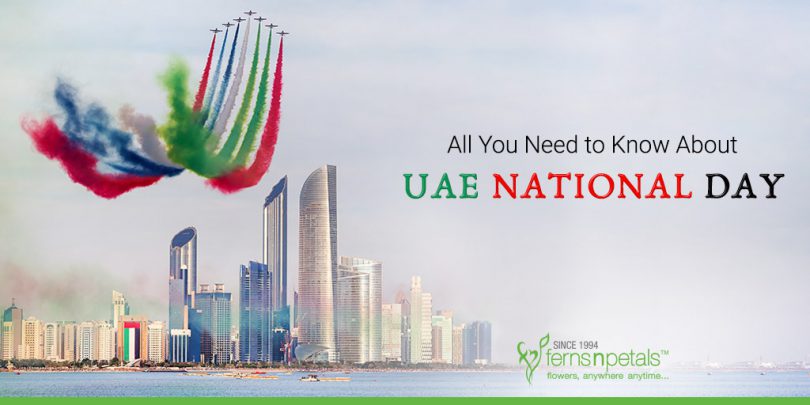 Less than a month left for the much-awaited UAE National Day! The country is already dotting the i’s and crossing the t’s to prepare for its 50th National Day next month. This year the celebrations have been manifold as the day marks the country’s golden jubilee. Hence, the day is all about extraordinary energy, high spirits and liveliness. And why not? After all, it’s the day to beat the drum of the country’s strength, freedom, power and evolution.

But before you eat, sleep and breathe its festivities, it’s important to know all about National Day’s history along with Commemoration Day. So, as the day approaches, let us delve into the whens, wheres, whys and hows of this glorious day.

History of UAE National Day
The UAE National Day is the anniversary of the unification of all seven Emirates into a single nation. In 1971, the rulers of six emirates, i.e. Abu Dhabi, Ajman, Dubai, Sharjah, Al-Ain and Umm al-Quwain, came upon a mutual agreement to merge into a single unit – UAE (United Arab Emirates). Soon after, in February 1972, the ruler of Ras Al Khaimah joined the amalgamation to be a part of the united country. But how did this idea of united settlement come into notion?

It happened when the British expressed their intention to withdraw from eastern Mediterranean colonies in 1968. Following this, a meeting was held between Sheikh Zayed bin Sultan Al Nahyan and Sheikh Rashid bin Saeed Al Maktoum. As a result, they mutually decided to form a united country, inviting the other Gulf Emirates to join hands. This paved the way for the modern-day UAE, as you know it today.

The day also goes by the name of ‘This is Zayed’ day as he became the first president of UAE after this unification.

Before the Formation of the UAE…
The Emirates were called The Trucial States. It was an assembly of independent Sheikhdoms where the British government and the emirates signed a treaty in 1892 to form a close bond.

Though not directly involved in the British Empire, these states became a British Protectorate. This involved Britishers defending these states from all sorts of aggression, and in return, they were not allowed to sell any land to another country without Britain’s permission. The treaty was terminated on December 1, 1971. On December 2, the seven emirates’ rulers had a meeting in a hostel and rejoiced at the beginning of a new era with UAE National Day. And the rest is history!

How will UAE be celebrating its National Day this year?

Like many other occasions, the day is celebrated with fireworks, rallies and a swarm of activities. Moreover, sending National Day gifts online, like personalised gifts, cakes, and national day themed flowers, is a great way to share patriotic cheer with loved ones. Given the topsy turvy times of COVID-19, the celebrations will be a bit different this year. They will take place at the Hatta Dam; an island exclave of the Dubai emirate. The shows and events will be broadcast on the National Day official website and all local TV channels for the spectators. Visit the official 50th UAE National Day celebration website and book your tickets if you wish to attend the event.

The event also coincides with the Expo 2020 Dubai that will be continuing until late March 2022. In light of UAE’s Golden Jubilee, several events have been lined up at the Expo, including a drone show and Expo 2020 pavilions.

Born and raised in the heart and soul of India, Anushka is a typical Libra who loves to play with words. She is an expert at creating engaging content that often sees Google search rankings surge. When not writing, you can find her swaying to Bollywood music, cooking noodles, enjoying riding her Jupiter to her friends’ place or speaking gibberish Japanese (Yeah, she’s an Otaku).