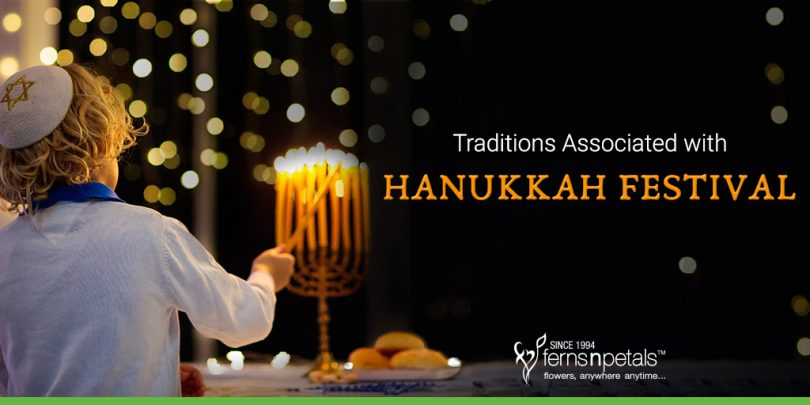 Remember when Ross rented an Armadillo costume in F.R.I.E.N.D.S to teach his son about Hanukkah since the latter was feeling all sad and grumpy on the notion of no visit from Santa? Of course, you do! The episode was hilarious and threw light on Hanukkah, the Jewish’s festival of lights. Hanukkah or Chanukah is an 8-days long Jewish festival that answers the dark night of winters with warm flames. But, before we dive deep into the Hanukkah traditions, let’s know a thing or two about the origin of this joyous festival.

How Hanukkah Came Into Being?

A long time ago, somewhere during the second century BC, Antiochus (a Greco-Syrian monarch) ruled Jerusalem with a hard hand. In the turn of various events, they did everything in their power to make the Israelites walk down the path of Greek beliefs and culture. However, the persistence and efforts of a small tribe of Jewish freedom fighters (led by Judah the Maccabee) drove the Greeks out of their land. The series is known as the Maccabean Revolt. And despite being outnumbered, the Jews managed to take back the Holy Temple and rededicated it once again to the service of God – a commitment coupled with the lighting of the Menorah in the temple.

Now, here are the traditional Hanukkah celebrations that were sparked due to the Maccabean revolt and they last to this day.

When the temple was rededicated, and people went to light the menorah, they found that the oil would suffice for only one day. However, by some miracle, the oil lasted continuously for eight nights. Fast forward today, families and friends gather together to light the symbolic Menorah, a candelabra that holds nine candles. On the first day, the menorahs are lit with a primary candle. Next, that candle is used to illuminate the second one. The pattern is followed until the eighth night. Though the candles are attached to the Menorah from right to left, they are lit left to right. The ninth candle is a helper candle that is used to light the others.

The joyous Jewish holiday comes with its own set of carols to sing around the lighted menorah. Maoz Tzur is a traditional song that is generally sung after candle lighting and is a significant Hanukkah tradition. The festive music typically focuses on togetherness and enlightenment.

On Hanukkah, everything from soups to nuts is deep-fried. Eating fried, heavy and delicious delicacies are a way to commemorate this oily miracle. Food like Latkes (potato pancakes), Sufganiyot (jelly doughnuts), and more are the prime attractions of the festivities.

The word Dreidel means to turn or spin. It is a spinning top with four Hebrew letters, i.e. Nun, Gimel, Hay, and Shin, engraved on it. The letters represent the phrase ‘Nes Gadol Hayah Sham’ that translates ‘A great miracle happened here’. As per the tradition, the Jews were prohibited from studying Torah before the Maccabees revolted. So they had to read the holy text secretly through gambling with spinning dreidels.

At one point in time, Gelt (either in the form of real coins or chocolates) was the only gift given at at Hanukkah. Ever since, the tradition has evolved pretty much. People choose thoughtful gifts, and unique gift hampers to extend their Hanukkah greetings. However, even today, some prefer to give cash to keep the authentic holiday tradition alive. Express your emotions with premium gifts by clicking here.

Well, these were some of the judiciously practised Hanukkah traditions. And no matter how you choose to celebrate this beloved festival, we are sure you will find meaningful ways to celebrate the holiday with your loved ones! Lastly, reflect on this holiday to bring meaning and light into your life.

Born and raised in the heart and soul of India, Anushka is a typical Libra who loves to play with words. She is an expert at creating engaging content that often sees Google search rankings surge. When not writing, you can find her swaying to Bollywood music, cooking noodles, enjoying riding her Jupiter to her friends’ place or speaking gibberish Japanese (Yeah, she’s an Otaku).